There were two types of US Armored Division during WWII.  The Light type and the Heavy type, I will detail out the differences between the two below. Armored Divisions were not meant to be assault troops, that was left to the Regular Infantry Divisions, the Armored Divisions were meant to rush through an breakthrough and romp and stomp as far into the enemy’s guts as they could, hopefully taking key objectives and cutting off large amounts of enemy troops.

A light US Armored Division was made up of three Tank Battalions, three Armored Infantry Battalions, and three Armored Field Artillery Battalions. These were broken up into three Combat Commands, A, B, and R. Each of these had a Tank Battalion, an Armored Infantry Battalion, and an Armored Field Artillery Battalion and each one was commanded by a Colonel.  Commands A and B were the primary combat force of the Division and R was the reserve. The Battalions could be swapped around between A, B, and R(sometimes called C) depending on strength and fatigue levels.

The Light Armored Division would also have a large number of service battalions and smaller units attached to make the Division as self-sustaining as possible:

A Division Supply Train (made up of trucks)

A Tank Destroyer Battalion Could be assigned

An Armored AA Battalion Could be assigned

These units could be broken down into smaller, usually company sized sub units and assigned to the Combat Commands depending on the needs of the missions. The Armored Division was intended to be a self-contained unit with all the assets needed to support and move itself around a theater.  A light Armored Division had an authorized strength of just about 11,000 men, the Heavy Division had 14,500.

The Armored Divisions were meant to exploit a major breakthrough won by the regular Infantry Divisions.  In many cases they were not used this way, and often got thrown into the lines as the enemy was faltering, using a single Combat Command to help secure the breakthrough while the rest of the Division rushed through the breach.  No Armored Divisions saw use in the Pacific, but the Sherman sure did.  The Sherman was really the heart of the US Armored Division, and its mobility and reliability really served it well there, it allowed US Armored Divisions to make very long runs once broken through, and it would limits on fuel supplies, not the tanks mechanical reliability that slowed it down. 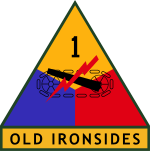 The 1st AD spent its early years figuring out what an Armored Division was going to be, and when they figured that out, they trained in the US until mid-summer of 1942 before shipped off to Northern Ireland, after a short stay they were off to England.  They were not there long, before they were shipped off to northern Africa for participation in Operation Torch.  The 1st AD would be the first US Armored Division to see combat.

The second US Armored Division put together and it saw just about as much as the first. This was one of only two Heavy Armored Divisions; all others were converted to the later ‘light’ TO&E. Formed at Fort Benning on 15 July 1940, on the same day as the 1st.

They shipped out for use in Torch, but were kept in reserve until the invasion of Sicily. They saw a fair amount of action on Sicily, and after were shipped back to England to be used in the Normandy landings.  The 2nd AD was landed on Omaha Beach on June 9th and fought in northern Germany until the end of the war, including the Rhineland, Ardennes and Central European Campaigns. 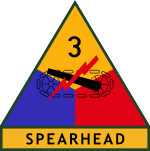 Also maybe known as the Third Herd, but may be post WWII.  The 3rd saw combat from Normandy to the end of the war in Europe.  They were formed on 15 April 1941 at Camp Beauregard in Louisiana.  They trained in California at Camp Young, until January of 1943, when they moved to Indiantown Gap Military Reservation in Pennsylvania. They would train on there while waiting to deploy overseas.

The 3rd AD arrived in Europe on September 15th 1943, they debarked in the Liverpool an Bristol area and trained there and on the Salisbury Plain preparing for the invasion.

They would first see combat almost a month after the June 6th landings in Normandy.  They would fight in the hedgerows, including at Saint Lô. Later in the same campaign they would help close the Falaise Gap.  They participated in both the Battle for the Hurtgen Forrest and the Battle of the Bulge. They would continue to fight into Germany, helping with the taking of Cologne, and Paderborn, and with reducing the Ruhr Pocket.  They liberated the Nazi Death Camp at Dara-Mittelbau, and finished with the battle of Dessau. They went into reserve to the end of the war.  It did a short stint as an occupation force before being deactivated in November of 1945.  It was later reactivated in 1947.

One of the few Armored Division that never adopted a name, it also developed a reputation. The 4th was often used as the spearhead for Paton’s Third Army and it was a tough outfit.  Their motto was ‘They Shall Be Known By Their Deeds Alone’. Activated on April 15th 1941 at Camp Pine (Later named Fort Drum), New York.  It would train at Camp Forrest in Tennessee, and then was shipped to California for further training at the Desert Training Center. They would be housed at Camp Ibis, near Needles California during this period.  By June of 1943 they would be at Camp Bowie, Texas, for more training in the Piute Valley. They were then off to Camp Myles Standish in Massachusetts for winter training.  Finally, in December of 1943, they were on their way to Europe, England specifically to prepare for the June of 44 invasion of Normandy.

The 4th AD debarked in Normandy on July 11th 1944, at Utah beach and was in combat by the 17th.  They saw action in  Operation Cobra,  and rampaging across France, they would see action in the Battle of the Bulge, spearheading Patton’s 3rd Army’s attack north to hit the Germans attacking Bastogne.  They would see action in all the major fights in the ETO to the end of the war. They did a tour as occupation forces before being shipped back to the ZI to be deactivated.

Another Divisions that saw combat from Normandy to the end of the war in Europe.  The 5th AD was activated at Fort Knox, in Kentucky.  Like many units after forming and some initial training, the shipped out for Camp Cooke California.  They spent a lot of time on Alert for Japanese attacks in their early training there. Next up was training in California’s Mojave desert.  They were on their way to Tennessee by March 24th for more maneuvers.  They would be there until July, and then they moved to Pine Camp N.Y. for some winter training. The 5th last stop before deploying to England was Indiantown Gap, PA, where they left their vehicles and were trucked to Camp Kilmer NJ, to wait for their ship.

The 5th were in England by February 24, 1944, and they were stay there until they deployed to Normandy on July 26. They were assigned to Patton’s Third Army, as “General Patton’s Ghost Troops”,  and would fight in Normandy, Northern France, Ardennes, Rhineland and Central Europe Campaigns.

Paths of Armor: The history of 5th Armored Division. 396 high quality pages of history on the 5th AD. NEW BOOK!

The 6th was activated at Fort Knox on February 15th 1942.  The 6th spent time at Camp Chaffee, Arkansas training then went on Maneuvers in Louisiana and then they were off to sunny California for training at the Desert Training Center in Mohave CA, and then off to Camp Cooke also in Ca. They were shipped by train to the east coast and loaded onto ships for transport to England, arriving in February of 44.

The 6th was landed on Utah beach on July 18th as part of Paton’s 3rd Army. They participated in the Normandy, Northern France, Ardennes-Alsace, Rhineland and Central Europe Campaigns.

The Combat history of the Super Sixth:  182 pages, ok scan with a lot of very good info.  NEW BOOK! 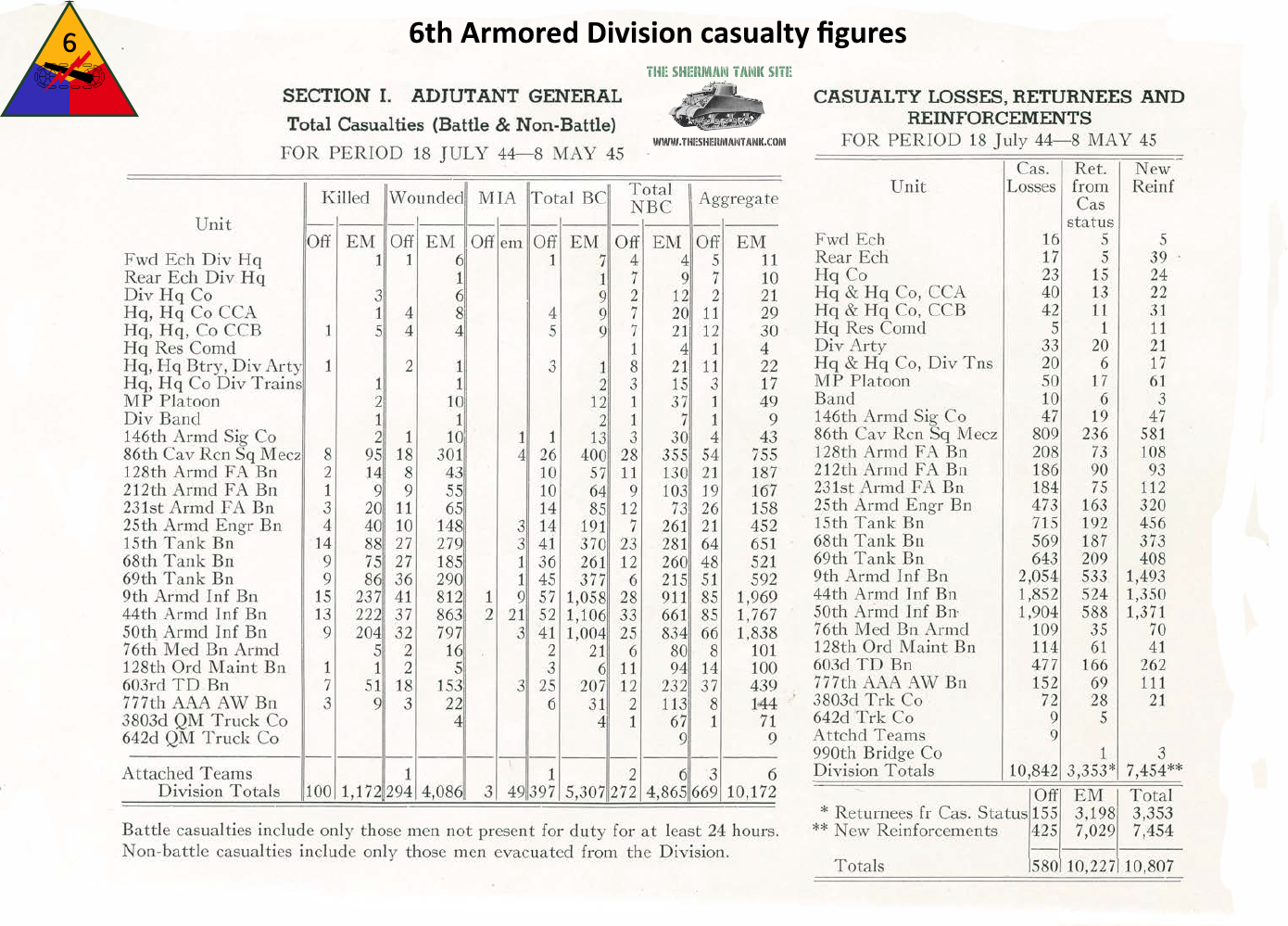 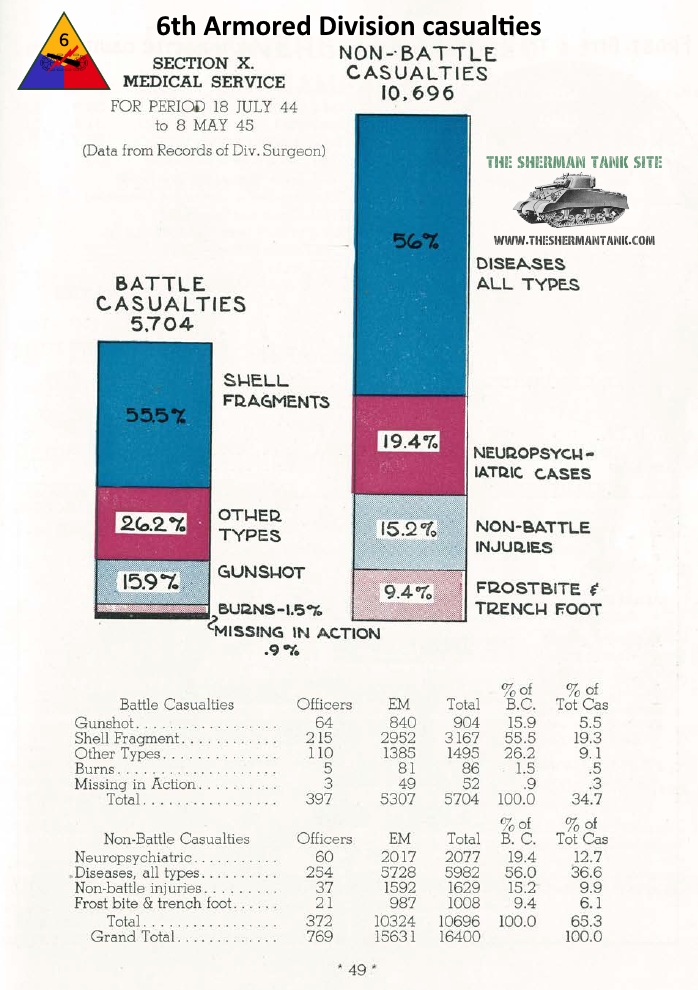 This AD started combat in northern France and ended it in Germany.  They were a part of Paton’s third Army 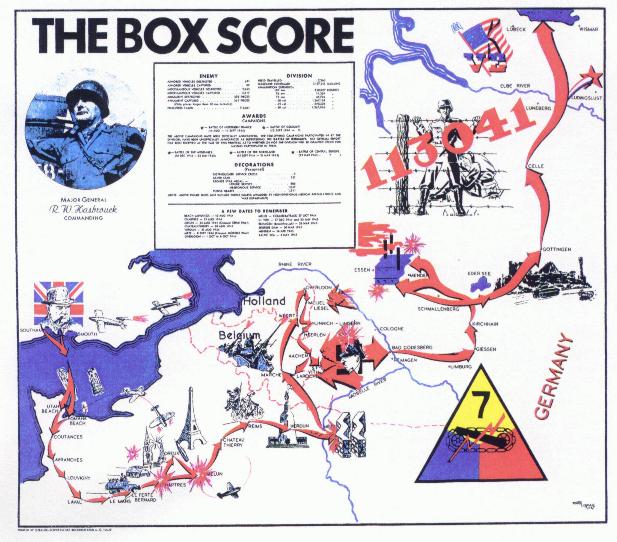 The 8th AD has a very nice website linked above.  I spend a lot of time on the Thundering Herds website, and it’s good stuff.

This AD came in toward the end and only fought in three major campaigns. They did help secure some key bridges over the Rhine River though.

They saw combat for a short time, three campaigns, but had a pretty cool nickname.

You can read their unit history here: Impact, the battle history of the Tenth Armored Division   NEW BOOK!

This AD came in late in the war but saw a good amount of action.

These guys were in combat for 16 days, and fought in two major campaigns.

They put out a nice history book, the 13th Armored division: A history of the Black Cats from Texas to France, Germany and Austria and back to California  NEW BOOK!

15th Armored Division:  This AD was a Phantom Division, not a real AD 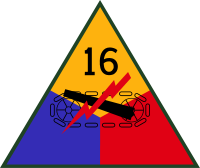