Tracks:  They Are a Weapon Too, and are more complicated than you would think! 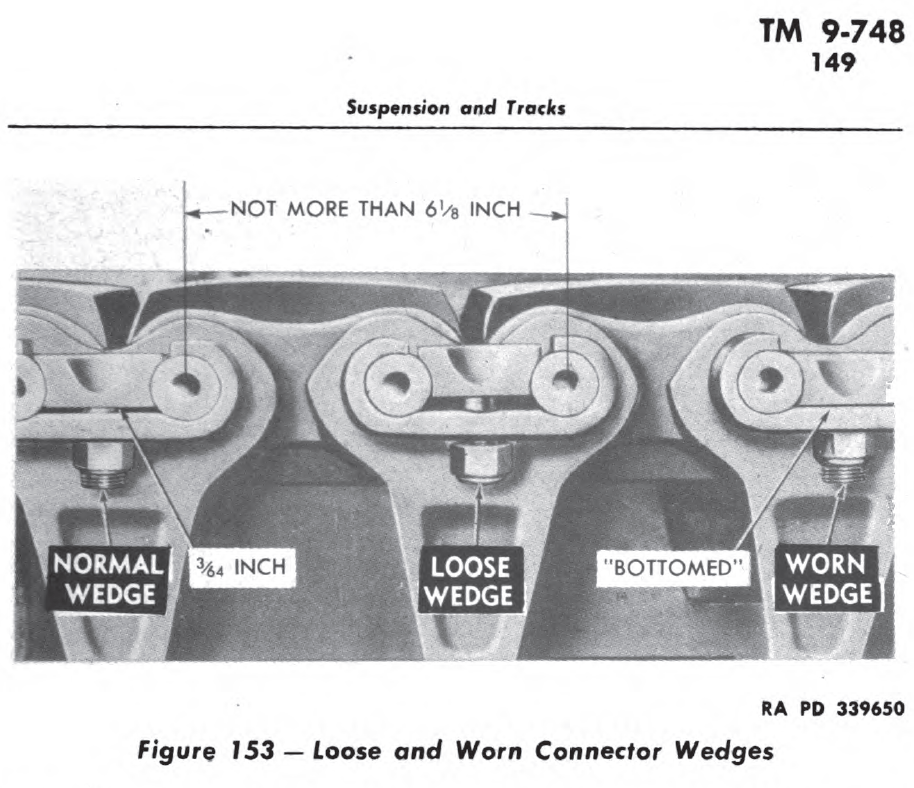 The Sherman VVSS had at least 14 different types of track, and there was another Three types for the HVSS. I have covered the commonly used ones here so far.  Most of the track types changes were ways to minimize the amount of rubber used  or  attempts to produce an all steel track as good as the basic rubber T41 and steel T49 track.

The narrow VVSS tracks limited the Shermans mobility in soft mud, sand, and boggy terrain. The Tiger and Panther tanks were better off road than the VVSS Shermans. It’s a good thing they were so rare, and there was a limit to how much mud they could deal with as well. The mud also accelerated the maintenance problems both these Nazi tanks faced and eventually mud got so deep in late 44 no tank could go off road much until the ground froze.

The T41 track was not well liked in Italy and wore out far faster than the motors or drivetrain on the M4 series.  For use in the mountainous terrain of Italy they wanted a an improved steel track, the T49 tended to slip on side hill situations, what they wanted was the T54 track. 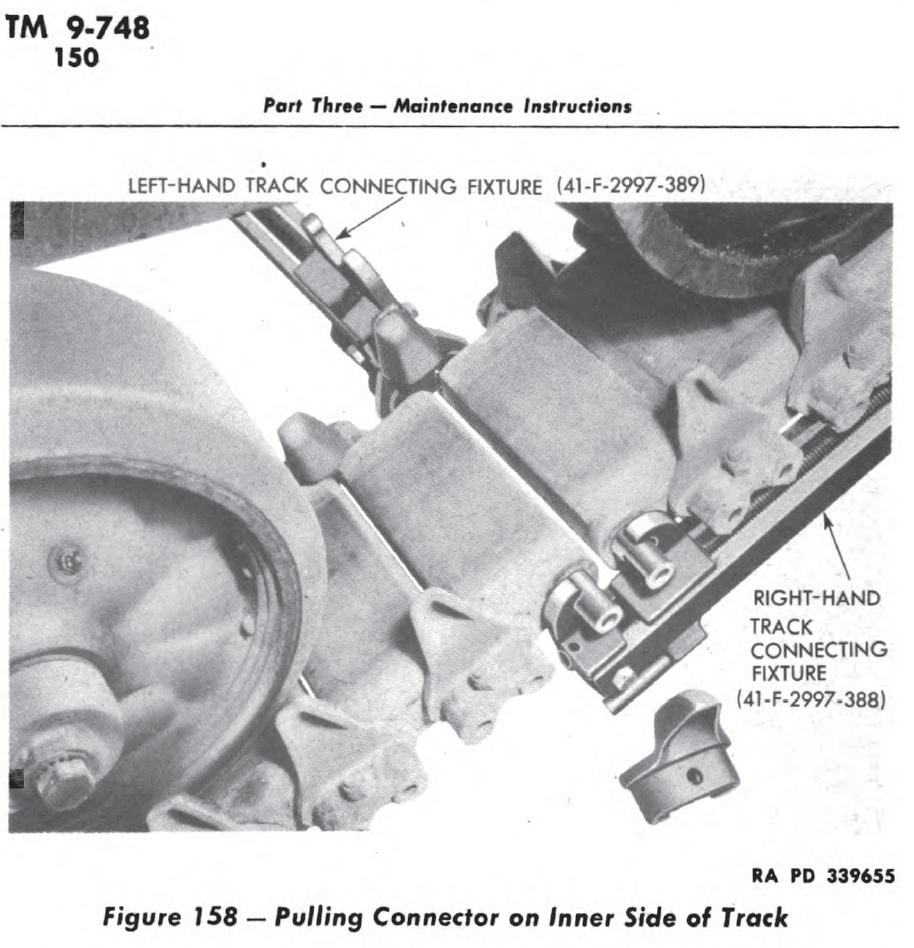 The Army came up with a field expedient solution called a “Duckbill” end connector. This was an end connector with a sheet steel foot welded to it, when bolted in place on the track it added several inches to the tracks width in soft terrain. The only drawback was they broke off fairly easy, but were easy enough to replace.  This was a very popular and widespread modification, and many little local factories in France were contracted to produce them. They were also factory produced and installed on production Shermans.

Tanks with HVSS suspension started showing up in Europe in December of 1944 and by 1945 were very common as replacements. Some of the HVSS tracks could use duck bills as well, but they were wide enough there was no need. When the wider tracks were using on experimental tanks like the T29, they did use the extended end connectors. 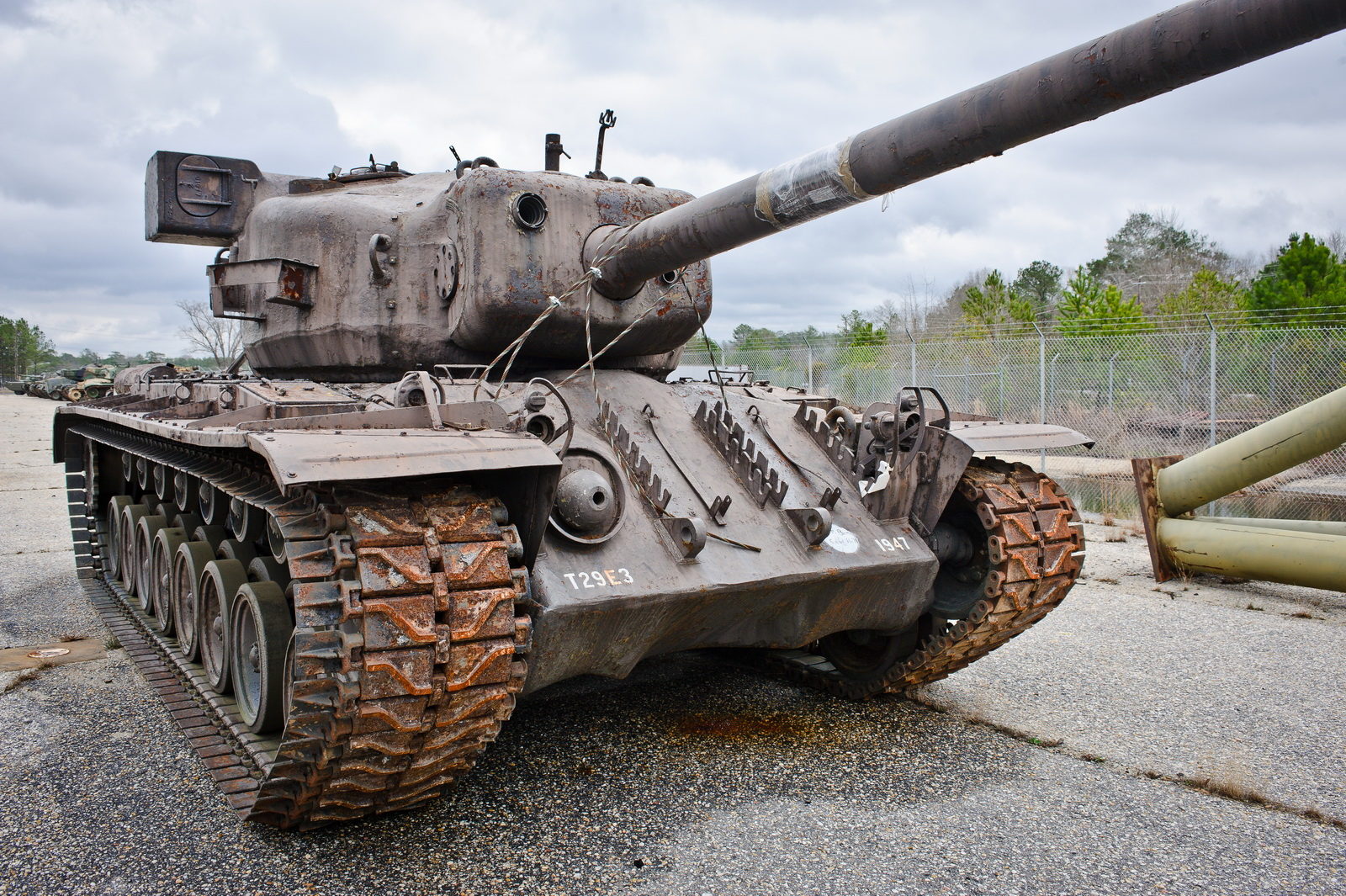 It is not something that gets covered in books on tanks all that often, at least not in the ones that don’t get into the down and dirty action, the tracks of a tank are deadly, and terrible weapon, and they did not discriminate or care who’s side you were on, and still don’t. Tank tracks, especially ones with protruding end connectors, like most of the tracks the Sherman used, have lots of edges that will catch loose clothing, hands, feet, tree branches, bushes, and drag them along or suck them into the bogies and this mostly addresses the dangers to the friendly people around the tank.  You always have to keep in mind how blind tanks were as well, meaning the doughs couldn’t depend on the tank crew avoiding them at all times. A Sherman backing over friendlies, when they were trying to get out of danger was not unheard of.

These dangers and more apply to the enemy infantry, known as crunchies for a reason, or anything small enough for the tank to crush.  Infantry foolish enough to jump out in front of a tank close enough to run them over will get run over, and the driver will aim for them with the tracks, though the front of the hull hitting a man at 15 miles an hour will kill them just as dead.  Guns, sandbag and log bunkers, houses, barns, cars, trucks, cows, sheds, mail boxes, phone booths and pretty much anything else small enough to be crushed by a tank probably are all fair game for the tracks, and machine gun pits, and log and sandbag bunkers are favorite target for these attacks, with houses being the least favorite, because basements ruin a tankers day. The messiness of this type of combat is one of the reasons it’s not a popular subject, and I won’t go into further detail about the types of things a track system can do to the human body, but it’s out there if you really want to find it.

VVSS Tracks, all these tracks are 16 inches wide, with a 6 inch pitch 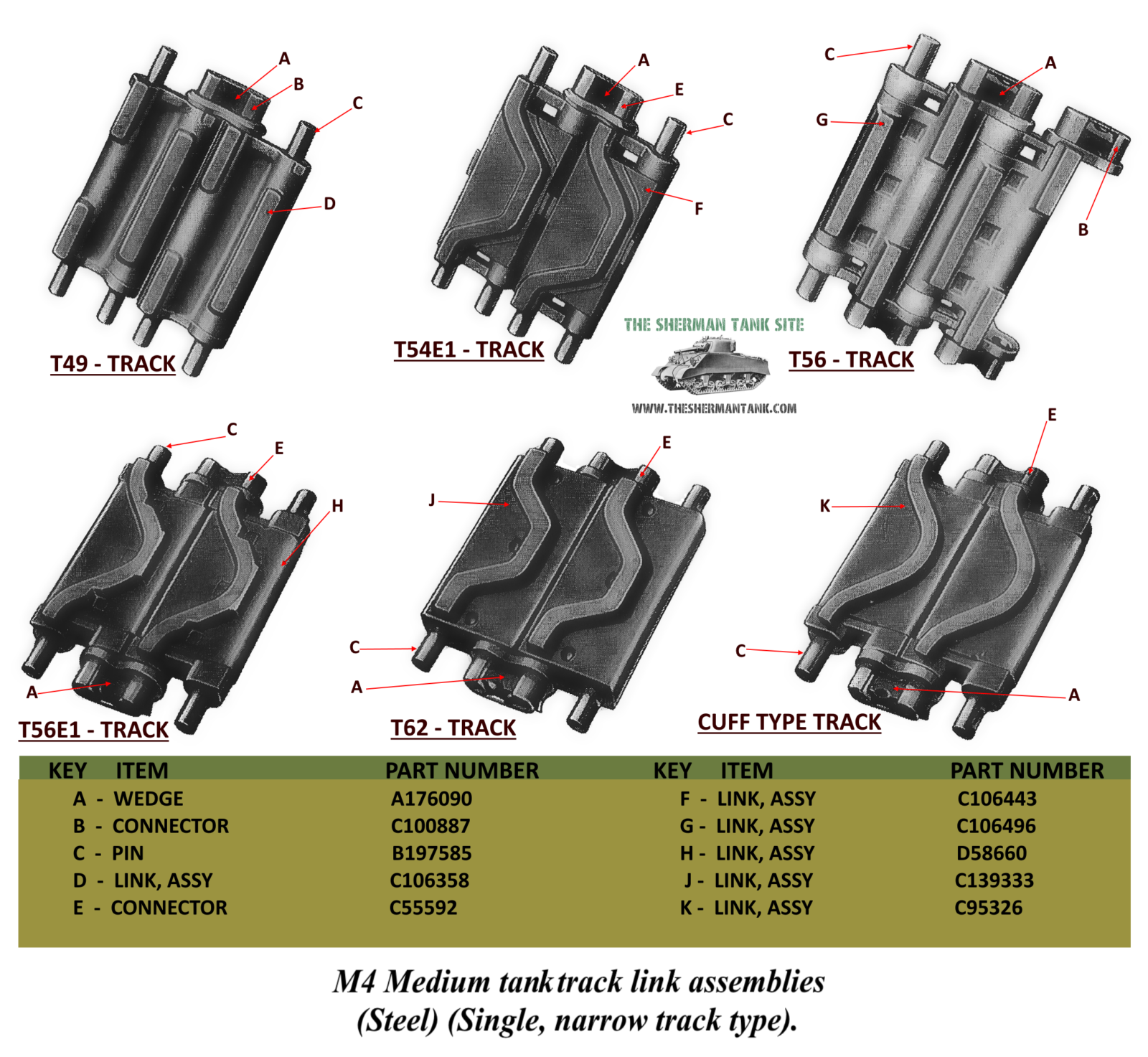 These images cover the types of VVSS tracks commonly used on US tanks. The UK had some specialized types they used on their tanks, and I will cover those in more detail at some point. Click for much higher detail versions.

The VVSS Track pads consisted of the pad, two pins, and a pair of end connectors.

T41:  This track was rubber, the blocks were reversible and was produced into early 43. The soviets did not like this track type, and it wasn’t great off road or on ice.  These tracks in good shape are not likely to damage roads.

T47E1: This track was a combo, steel bar and cleat tread face, with a rubber back. An attempt to improve the track and use less rubber.  This was a tread type the soviets would have taken on their lend lease tanks.  This track offered good on and off road performance, but could be hard on road surfaces.

T48: This is the classic rubber chevron seen on a lot of Sherman tanks. This track was the longest lived Rubber type. It was produced after the war, and I wouldn’t be surprised if someone isn’t making them now. This track was also not popular with the soviets. This track is still popular on restored Shermans because it won’t  damage public roads.

T49:  This all steel track looks like the T47E1, but lacks any rubber.  This was the prefered Soviet Lend Lease track, but I have seen photos of it on just about all versions, maybe not A3 tanks.

T51: This is another rubber and steel combo track, but with no tread, just an extra thick, flat, rubber pad, with a steel backing plate. This track replaced the T41.

T54E1: This is another all steel track, but this one with a chevron like a long horn cow welded on.  This was a fairly common track on US and lend lease tanks.

T56: This was an all steel track, with a steel bar and cleat face, but was bolted together.

T56E1: This track was another bolted together steel track, but with the  chevron bolton on.

T62: This is another multi part, all steel track, this one riveted together. It also has a distinctive curved chevron, and protruding rivet heads on the tread face. I’ve only seen it on British lend Lease tanks.

T74: This is a post war, combo, rubber topped, steel faced, with a chevron welded on track.

End Connectors: They hold the whole thing together!

An End Connector is was the track pins go through to hold the tracks together. The ones used on VVSS Shermans had a guide horn on them, and they were what kept the track in place as well as holding the track run together.  There were several types, and some specific to certain track types.  The early ones had a narrow guide horn, and the later ones had a mud wider hord.  In some cases a few of these horns would be reversed for extra traction.

There was a variation of the End connector, that had a sheet metal extension added, to increase the width of the VVSS tracks. These wider end connectors were called ‘Duckbills” and were a very popular modification, and the factory added them on some models, but many were also sourced from small shops in Europe. If they had a drawback, it was they were fragile, it was very easy to scrape them off on anything hard.

Tank tracks require maintenance, the tension has to be checked, and each end connector, the inside ones included has to have its wedge nut tightened, generally at least once a day. This would be done when a halt was called along with other preventive maintenance.

There were far fewer types of HVSS tracks, I think the experience with the VVSS track types was put to good use when the HVSS types were designed.  They only come in three types, four if you include an odd sub type.

An HVSS track link consists of two pads, a center guide and a pair of pins, and end links. The center guide ran between the paired boggie wheels to keep the new much wider tracks in place.  The end connectors were lacked the guide horn the earlier Shermans used.

T-66: This was a cast steel track, and the first type used on Shermans, this was the mostly common track on the M4A3E8 76w HVSS tanks that went into combat in December of 44. It’s notable for being a single pin type, when all later tracks were double pin. This track type is rarely seen on restored to running condition Sherman, since most places won’t let you drive on public streets because of the damage the tread causes.  It was mostly fazed out by Korea. This was also the only all steel track for the Shermans HVSS. The center guide on this track was cast into the link itself.

T-80: This track is a steel faced chevron with a rubber back. This track type just made it in at the end of the war, and was probably on a lot of occupation tanks.

T80E5: This track is an oddball, and came about by the IDF coating regular T-80 tracks with rubber.

T84:  This track was all rubber, formed around the pins, and had half of a rubber chevron on each block. These tracks were only used on post WWII tanks.