Jungle Tanking: The Sherman Did Just Fine As A Jungle Killing Machine

Conventional wisdom often states, Jungles are no place for tanks, but that wisdom is wrong. It is very difficult to operate a tank in the jungle, that is true, but that doesn’t mean it can’t be done. In many cases it requires the close work of heavy engineers and their bulldozers.  In at least one case engineers had to put in a corduroy log road to get the tanks up to the fight when the Marines used them on Cape Gloucester. When a tank can be brought up though, when used correctly, it was a very useful tool in destroying enemy bunkers and strong points that could not be flanked.

Tanks have to be used in a different way than they would in just about any other terrain when fighting in the jungle, and more so than any other terrain, are dependent on their infantry support to protect them and be their eyes. They also cannot be employed in large numbers, fighting in the jungle is a very up close and personal affair, and from two to six tanks are all that are needed or can really be employed.  In most cases it will only be two or three, because most jungle fighting is limited to certain paths due to terrain restrictions.  If the area was wide enough, a tank was only behind a bulldozer in off road ability, but large trees and rocks will stop any tank.

The Tank could be useful for clearing some of the jungle terrain, through the use of its machine guns, cannon with canister rounds or HE, and even its tracks.  It would take a fairly large tree to stop a tank, the bigger the tank, the larger the tree would have to be, and the tracks are very good at tearing up underbrush.  In some cases tanks were used to pull loaded trucks up roads normally impassible due to mud.  They could be used to haul in supplies to troops and in some special cases used to retrieve wounded troops pinned down by enemy fire, by driving over them and pulling the wounding in through the bottom escape hatch.

To successfully employ tanks a thorough recon of the area the tanks are going to operate in was needed.  A specific set of objectives, preferably, ones that could be seen from the jumping off point were needed to effectively use tanks, or they just got in the way.  With established objectives, specific infantry squads would be assigned to work directly with individual tank, to baby sit it and keep enemy infantry away.  The platoon leader would be encouraged to either ride on the tank his men were protecting, or stay very close to it so he could talk to the tank commander. The tanks would hold back with their protecting infantry, until the leading grunts made contact, then as needed they would move slowly forward and engage targets pointed out by the grunts.  Moving slow and staying with the men protecting the tank was very important, if they fell behind or got run off by flanking fire, the tank became very vulnerable to close infantry attack.  This is why the platoon leader staying close to the tank was important, so it could be told to start backing up the fire was too heavy.  If an attack failed, the tanks were advised to never attack over the same path, especially if the Japanese had time to bring up AT guns or mines.

The pace of these attacks was purposely slow, they needed to make sure they were not bypassing an AT gun or tank killer team hiding in the brush.  Various methods were used, from hand signals to tracers and smoke to designate targets to the tank.  Smoke worked ok, but someone on the phone on the back of the tank telling the TC exactly where to look worked the best.  Once the bullets were flying the tank crews buttoned up and would not open up until asked by the supporting Doughs, or the intense part of the fighting was over.  Sometimes the tanks would need to be given a break in very hot weather, operating at low speed could cause overheating and vapor lock, and was hell on the crews too.  In the tropical heat, the interior of an M4 was not a pleasant place to be.

Once the objectives were achieved for the day or the attacks were stopped, the tanks pulled back far enough behind the lines to refuel, repair and, rearm the tanks. They would also take out as many wounded men as they could carry on their way to the rear. In the morning they may haul extra ammo and other supplies forward to the units who held the line.  Tanks, unless under the most dire circumstances were not used in the line at night, or used in night attacks.  Tanks, blind enough during the day, are so blind at night they are a threat to everyone around them, friend or enemy in the jungle.

The Army and Marine learned a lot of lessons about employing tanks in Jungle terrain, they recorded and disseminated these lessons in the very interesting: Combat Lessons, The Rank And File, What They Are Doing and How They Are Doing it. This was a series of nine, 50 to 90 page pamphlets, put out by the  DOD and sent out to all the troops I have 8 of the 9 hosted in the downloads section, and they are all interesting reads,  they do not cover Armor exclusively, or even in every issue, but they are still a very interesting look at how the US Army and Marines worked during WWII.  When the Sherman was employed using the lesson the Army and Marines learned on the job, they proved to be a crushing and very hard to deal with part of the Allied Arsenal in use against them. The Japanese really had few options in dealing with a Sherman once it was in the fight, the rare 47mm AT gun, hard to employ in heavy jungle, magnetic mines and suicide squads, and the occasional oddball tank trap were the only tools in their arsenal that could deal with the Sherman and none of these was as good as the basic Panzerfaust or German Pak 40 75mm AT gun. The Japanese tanks were so bad they are not worth mentioning in this section. 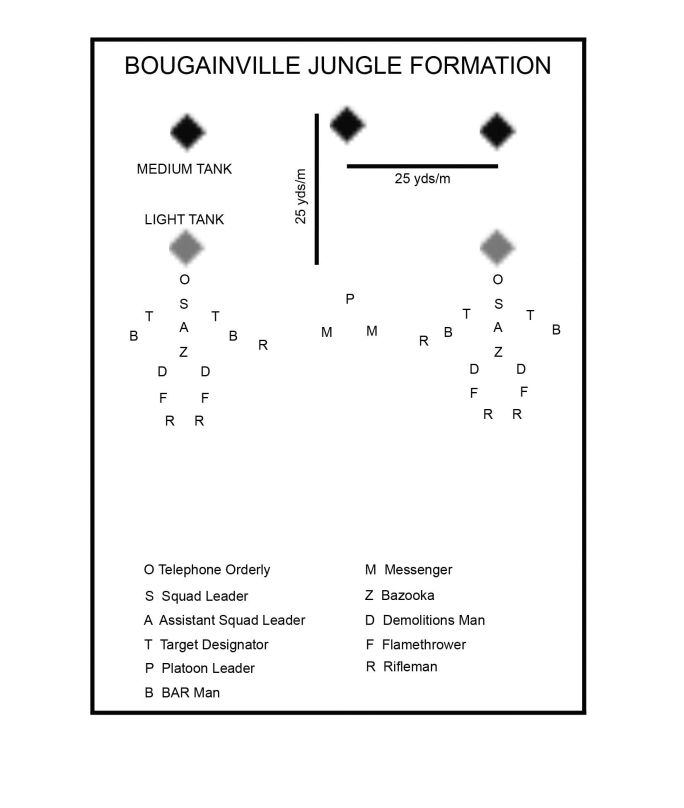 Check these links out for further reading.

US Army Tanks in the Jungle Part, 1: This pair of Hatch’s are by guest writer, Harry Yeide, the author we know from the books section.

US Army Tanks in the Jungle Part, 2: This is part II by Harry Yeide.