The M4 Medium AKA the Sherman tank over the last few decades has had its reputation severely soiled by several documentaries, TV shows, books, and games, all hailing it as a death trap, engineering disaster, or just a bad tank. The Sherman tank may be the most important, the most versatile and arguably the best medium tank of the war, and this site should show you why along with documenting as much about the Sherman as I can along the way.  The only other contender for the best tank of WWII award would be the Soviet T-34. These two tanks are very comparable and would fight each other in later wars, staying very even in capability through their service lives.

This site will cover why the Sherman was a better tank than anything Germany, Italy or Japan produced during the war, on both a tactical and strategic level. I will not be reproducing the work of others and will link to the places that already cover some information, like the wonderful Sherman Minutia site. I will cover all the major changes made to the each Sherman model though.

I will also try and document the Shermans civilian use, in everything from construction demolition (Tanks used to knock down buildings), to logging use, or use as tractors, the Sherman had a varied an interesting life in civilian hands post-war. There were several companies that went into business modifying Sherman Chassis for use in the logging and line laying industries.  At least one M32 recovery tank was used as a general purpose heavy wrecker, at a shipyard. Hollywood got its fair use out of the Sherman as well, and it went on to become a popular item with vehicle collectors. Some of these restored Shermans have working canons. Who knew getting the license for a canon is easier than a machine gun?

Because of the Sherman tanks general ruggedness and reliability, the ones that do run will go on running for years to come and many generations should be able to enjoy them. Unlike many of the Shermans in Army hands that are just rusting away, some not even open to the public, or even covered with a tarp. Maybe someday the Army will get around to preserving our armored history instead of letting it rot away in parking lots, but it seems doubtful at this point.

So far, I think this site has the largest collection of Sherman related technical Manuals and Field Manuals, along with a ton of Armor related and General Army TM and FMs as well. All for free. With the Data sheets that have been done, I have an awful lot of Sherman hard data up, on the tanks, Guns and one motor so far.  We have pages for each gun the Sherman used and data sheets for each weapon. We have more detailed technical drawings on the Sherman tank and more high-quality photos. We are now adding specific pages for all this Sherman info, to make it easier to find. You can find these pages via the menu bar at the top of the page! 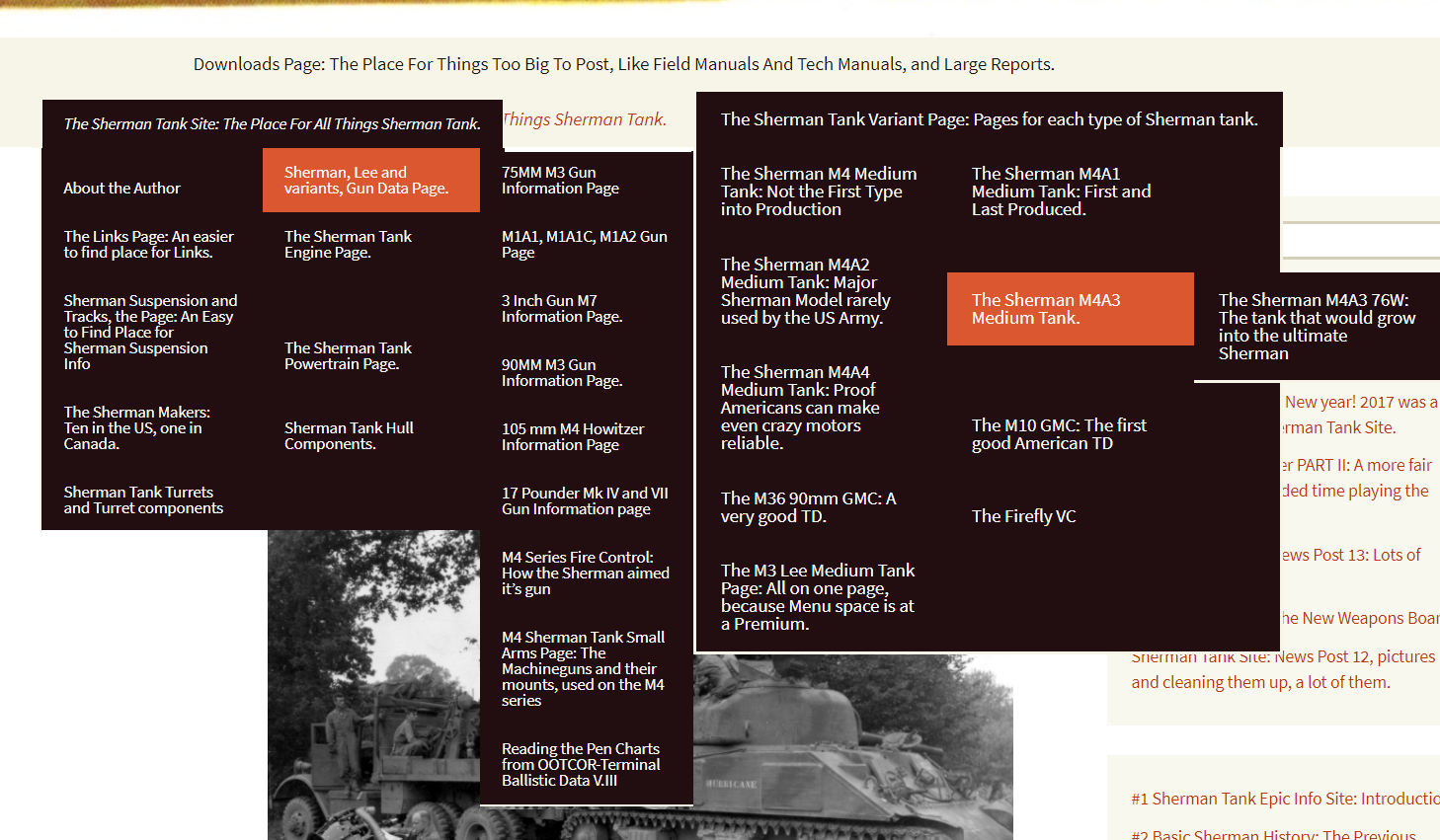 This year I plan on doing a Tankers Story section, a Data Sheet for the Transmission, differential, and final drives,  a data booklet for the GM6046, R975, and A57. I will also be putting up a lot of restored photos from various manuals.