There were two types of tank battalion, the type attached to infantry divisions, as ‘independent’ tank battalions,  and the type that were a part of an armored division. They were pretty much the same in organization, if not in how they were used. The life of a tanker could vary wildly from another’s depending on where he got assigned, and the tamest would probably be when they got sent to an armored division.

The Tank Battalion at the start of the war was composed of a much smaller number of vehicles, and almost no specialized ones.  As the war progressed, the Tank Battalion filled out a lot. They even added a whole service company with a large number of trucks, wreckers and ARVs. Early in the war they seem to have relied on the M3half track to fill in for specialty vehicles they didn’t know they needed yet. Once they figured it out in 1943 though, the tank battalion doesn’t seem to have changed much

Let’s start with the smallest sub unit of the Tank Battalion, The tank platoon. 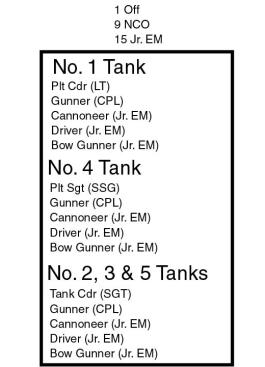 A Lee tank platoon in North Africa, or training in the US would have (1) Officer, (9) NCOs and (25) enlisted men. Later this would be reduced by five enlisted as the radio operator was dropped. In the US the tanks could be several kinds of Lee, but the units that deployed with M3 Lee tanks for Torch, were M3 Lee models with the R975 powering it.  The Lee was pretty short lived in US Service, and the US only took them into combat because there was a shortage of Shermans because of British needs, but once supplies were up, they US removed them, even from training. Many got shipped to the Australians.

These men would be permanently assigned to one of the tanks. In most cases the tanks were named, and the name reflected the platoons, company designation, for this example we’ll say the platoon belongs to B Company, so all five tanks will be named something starting in B. In the field, the tank would be home, and they would sleep under its tarp next to it, or in it if they were paranoid.  The men of a tank platoon would be very close, as they would spend a lot of time with each other.

No. 3 Battlingbitch: M4A1 76w, Commander by a Sargent Gunner: Corporal, Loader, Driver and Co Driver: Jr enlisted. This tank has been around since Cobra.

No. 5 BettyW: M4A1 75, Commander by a sergeant, Gunner: Corporal, Loader, Driver and Co Driver: Jr enlisted.  This tank is a small hatch survivor.

This was as small as the unit was broken down in an Armored Division, at least most of the time. In a separate tank battalion things would be different. Often a battalion would be assigned to an infantry division for an extended period of time, a few the divisions the entire war, and they used tanks differently. Sometime assigning two tanks to a company of infantry, or three, two tanks was called a Light Section, three a Heavy Section, and that was as small as the tankers wanted to go, but sometimes even single tanks could be working with a couple of platoons of infantry more than their partner tank.

In a separate tank battalion, once assigned to a division for battle they were often broken down much further. The way they usually did it was each regiment of the division would get a company, and then each battalion of the regiment got a platoon. The HQ platoon would be held in reserve or used to beef up a special combat team.  One tank platoon could get to know a battalion of troops very well if they worked together often, and that made for a better team. The longer they stayed assigned together the closer that bond got. Some Army officers even encouraged the exchange of men in bivouac, so infantry and tankers could see how the others lived.

A later war Sherman Company is made up of three Platoons, just like the example we just talked about and a headquarters platoon with two gun tanks and a M4, or M4A3 105 tank or M7 Priest.

The unit has shrunk a little, B Company has 5 Officers, 39 NCOs, and 73 Jr. EMs The HQ Platoon had three tanks, a pair of M4 tanks of any 75/76 variety for the Company Commander and 1st Sargent. The third tank would be a M4A3 105 tank or an M7 priest if the 105 tank was in short supply. The HQ platoon would also have ARV assigned.

It would also have a maintenance section and admin, mess and supply section attached. This part of the company HQ would have their own trucks and jeeps and would hang back with the ARV and the 105 tank while the fighting was going on. Sometimes the truck would run ammo out to a tank or the ARV would move out to get a tank unstuck or deal with another problem of that type.  It would not be uncommon for the men in the HQ platoon not assigned to the combat vehicles to not see the rest of the men in the company for weeks at a time when assigned to a separate tank battalion. When part of an armored division, the companies worked together, and the company commander would lead his company into battle. One of the main differences here are the 105 tanks or M7 Priests and the Tank ARV, that the early company lacked.  They had fewer trucks though, since they were moved into the battalion Service company. 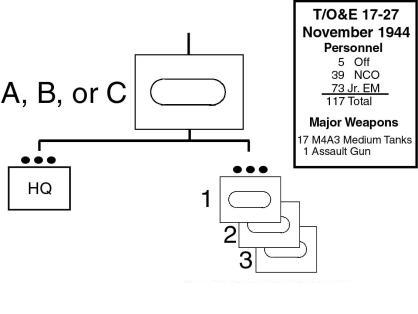 The light tank company was configured more or less the same way as the medium tank company, three platoons of five tanks, with two HQ platoon tanks. They was they were used was very different. Even early in the war in North Africa, the light tanks armed with 37mm guns were having trouble. When used in the recon role they had to rely on speed alone to get them out of trouble since the gun wasn’t very useful against anything but the lightest of armor.

They were fast, and they had lots of machine guns, so they could be used, to a degree against soft targets, so they were used for rear security, messenger duty, and screen flanks and scouting. They would be useful against infantry without good AT weapons. Late in the war when the M24 Chaffee started showing up, these light tank companies really got some teeth, in a very nice little package. The M24 had a 75mm gun that was an improved version of the M3 75mm gun, and had a concentric recoil system. Once they got the new light tank they probably took scouting duties back on to some degree, but even the Chaffee was a light tank, and all sorts of AT weapons knocked them out pretty easily. 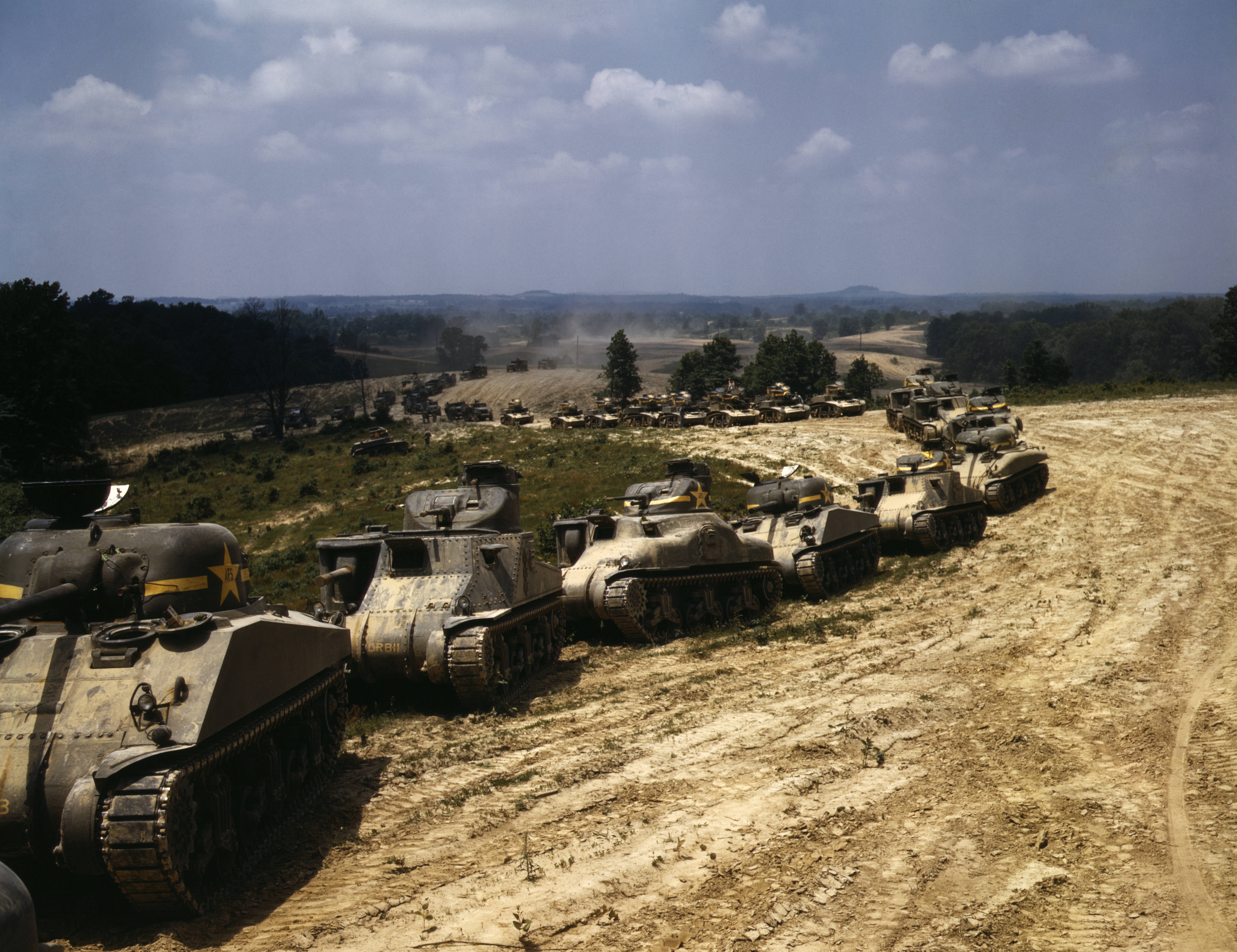 This was the whole kit and caboodle, three medium tank companies, one light, six assault guns, and a service company with three more ARVs. In an AD, all these units would work and train with each other for years. There weren’t that many revisions to the way ADs were configured, so the same units would stay in the same Armored Division for years or the whole war. There would also be a fair amount of competition, not only among the battalions, but amongst the companies in the battalions.

They would also have a chance to work with the same Armored Infantry Battalions, and the tank infantry team tactics would become ingrained, and they would have far less trouble working together than many of the independent tank battalions. They also had no issues with supply, since they were part of the divisions supply system.

The independent battalions had a tougher life in many cases. Many got moved around from Infantry Division to Infantry Division, and how well the infantry knew to work with the tanks varied a lot. This could mean the infantry officers may not know the best way to employ armor and would often ask the tankers to things that a tanker knew was suicidal. This sometimes resulted in the tanks being forced into attacking infantry in towns, or even just dug in positions alone, and in the few cases they succeeded, if they were not relieved or supplemented by infantry, they would be pushed off the objective by being overwhelmed by sneaky infantry who can surround tanks without support. They also spent more time on the line than the AD battalions.

They also had to order they supplies, including spare parts through the ID they were attached too, and if the ID supply officers had no experience with this, shortages could take place. The experiences of the independent battalions really varied though. Some worked with the same ID the whole war, others got moved around so much no one got used to them or vice versa, and of course there was a range of experience in between.  Often though, the independents, rarely worked in more than platoon size groups, and the only time they would see each other on a regular basis is if they were supporting units in the same fights, or after the battles when the units went into the reserve to rebuild, but in many cases, this is where the tank battalion was detached and sent to another ID in combat.

One final thing to keep in mind about these TO&Es, is they are an ideal, or full strength unit. Once in combat, and sometimes even before, because of shortages of items, vehicles or people, any given tank battalion might be missing several people or vehicles.  Once the unit was in combat, and usually they wouldn’t be deployed unless they were pretty close to their authorized strength, combat losses would be replaced based on the replacements in depots on hand, as would vehicles. Plus, at any given time several tanks, halftracks or trucks